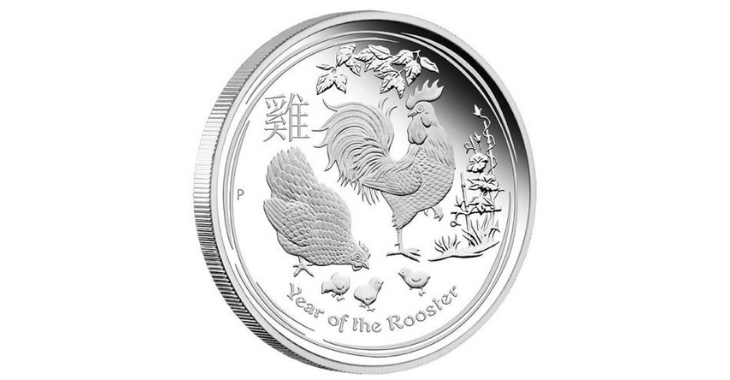 Silver Lunar Rooster. It sounds like an exotic Chinese zodiac sign yet it is actually quite the gorgeous silver coin. Issued by the Perth Mint, the 1 ounce Silver Lunar Rooster is one of the most popular coins in the Lunar series. Lunar coins are revered for their gorgeous aesthetics, elite quality, and limited supply. This year’s Silver Lunar coins are the first to be minted with .9999 fineness, making them that much more coveted by coin collectors, investors, and everyday people who have an affinity for the finer things in life.

The Silver Lunar Rooster is coveted for more than its silver content and the fact that there is a limited mintage. This is a stunning coin in every respect. The obverse side displays Her Majesty Queen Elizabeth II as portrayed by the famous artist Ian Rank-Broadley. The coin’s silver purity, weight, face value, and date are also shown on the obverse side. Flip the coin over and you will find a beautiful scene illustrated in exquisite detail. This side of the coin features a rooster, three chicks, and a hen positioned by wondrous flowers and bamboo. This scene is further enhanced with the Chinese character that represents the word “Rooster” along with the Perth Mint’s signature “P” marking and an inscription that reads “Year of the Rooster”.

The Silver Lunar Rooster has a single ounce of .9999 fine silver. Each coin is supplied in a protective plastic casing. If you prefer to purchase Silver Lunar Rooster coins in multiples of 20, you can acquire them in sealed rolls. Elect for multiples of 100 and they will be safeguarded in a sealed box. This is a sovereign coin that has the full backing of the Australian government.

The Australian Lunar Series II represents the culmination of decades worth of effort in the quest to mint the perfect bullion coins. The Lunar Series portrays the Chinese Lunar calendar’s animal themes in vivid detail. Each year’s coins feature a brand new reverse design. The current year is that of the rooster. Those who were born in 2017, 2015, 1993, 1981, 1969, 1957, 1945, 1933, and 1921 should be proud of the fact that they came into this plane of existence during the Lunar Year of the Rooster. The Chinese wholeheartedly believe the individuals born in these years are highly sociable, trustworthy, honorable, and hardworking.

A coin struck by the highly respected Perth Mint is guaranteed to be of the highest quality. Evidence of a coin’s Perth Mint roots immediately boost its value. Perth Mint coin experts sweat every last detail to generate absolutely flawless creations. Pick up one or several Silver Lunar Roosters and you will rest easy knowing your coin(s) was produced by one of the world’s best mints.

In particular, the Perth Mint Lunar series is lauded for its superior quality. Check out a variety of precious metals portfolios and you will likely find that the Perth Mint Lunar is one of the focal points. The series debuted back in 1996. It is now one of the most collected series on the planet. The initial demand for Lunar coins stemmed from Asia and subsequently spread to the United States, Europe, and beyond.

Ask anyone who is in the coin business and he will testify to the incredible artistry and quality of Lunar Series coins. No two Lunar Series are the same. Each features an idiosyncratic design that sets it apart from its predecessors as well as the Lunar coins to follow. The Perth Mint limits the mintage of Lunar Series coins, creating the possibility for a collector to make a handsome profit in surprisingly little time. These coins will likely continue to sell out each year they are minted.