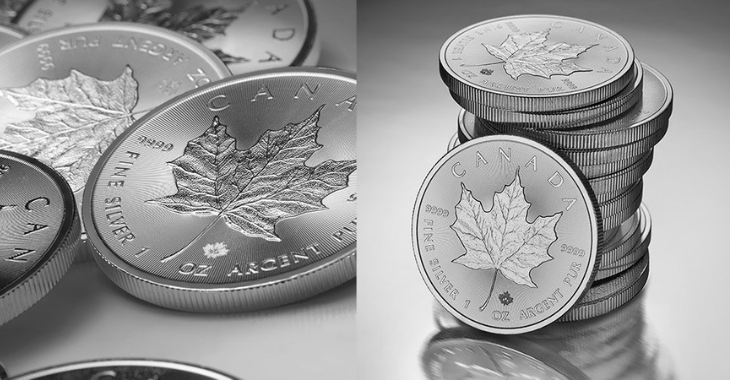 The 1oz Canadian Silver Maple Leaf silver bullion coin is legal tender with a five-dollar face value. It is made with 99.99 percent silver content, making it one of the finest of all official bullion coins available across the globe. It weighs one troy ounce which equates to 31.103 grams. The coin has a 37.97 mm diameter along with a 3.29 mm thickness. The obverse side shows a profile image of Elizabeth II as depicted by artist Susanna Blunt. The image was created in 2003 and first introduced in 2004. The other side features the Canadian Sugar Maple Leaf and the word “Canada” engraved above the leaf. The coin’s purity of 9999 is also engraved on each side of the leaf.

The Canadian government decided to issue a new micro-engraved laser mark along with radial lines and a small, repeating sugar maple leaf beneath the main image in an attempt to prevent illegal replications. Interested buyers will also find it worth knowing that the coin’s edge is serrated. These coins are completely similar to one another in all facets except for very minor and unpredictable breaks in the luster, contact marks created by striking, and various subtly spotted surfaces.

The iconic maple leaf has been displayed on the coin in each year of its existence. All in all, three different editions, including special editions of the coin have been released. Each of the three versions has featured a different profile shot of Elizabeth II by the aforementioned Blunt, Arnold Machin (1988 – 1989), and Dora de Pedery-Hunt (1990 – 2003).

If you are looking for a highly unique coin with lasting appeal, the 1oz Canadian Silver Maple Leaf is for you. This sovereign coin as recognized by the Canadian government is in stock at MyGold at New Zealand’s most competitive price. The 1oz Canadian Silver Maple Leaf coin looks fantastic, it is recognized as legal tender and has a certain cool factor that other coins just do not have. Contact us today to learn more about our inventory and pricing.