The value and heritage incorporated in the Perth 1oz 2019 Silver Bar aren’t fully understood until one looks back on the history and background of Australia’s mining heritage. Silver has been and continues to be one of the biggest natural resource assets for the country, being produced annually by the tons because so much of it is still present underground. That high quality ore is represented in the 2019 Perth Mint Silver Bar, an amazing product of artistic and minting quality that has made an international collectible in numismatic circles as well as for those who invest in bullion silver, especially as it situates for another value climb.

The first authentic mining operation for Australian silver was situated near Adelaide. It was a combination activity that started as an offshoot from lead mining in the same location. As the miners worked, they realized the silver ore that was being exposed was just as valuable if not more.

Silver for Australia appeared in 1883. A fellow named Charles Rasp was busy trying to find tin in a number of rocks already dug up in the area he was working where lead mining was occurring. Instead, what he found inside the rocks was silver. The location became famously known as Broken Hill, and it still produces viable harvests of silver annually even today. It’s also a primary producer of zinc and lead. The initial silver findings became a boon for the Broken Hill Proprietary Company Limited, which became the primary business pulling silver out of Broken Hill.

Major silver veins crossed the area, and significant deposits were located in New South Wales as well as Mt Isa, located in Queensland. With exposed locations quickly stripped by the first mining operations, going underground was obviously the next step. However, this venture didn’t really move into high gear until the technology became available.

By the 1920s additional veins were producing sizable harvest locations. The Mt Isa vein was identified in 1923 by one John Miles, and the timing was ideal. Silver was in high demand, and Miles stayed steady on the location producing silver decade after decade. Overall, the Mt Isa deposit put out 90 years of product. And an additional deposit was found in Hilton nearby in the 1940s. However, technology was a barrier and despite the discovery, the silver couldn’t be reached until later.

In the 1970s a number of major silver deposits were found at depths that were previously unreachable without the right digging equipment. The Scuddles mine in Western Australia found silver at 140 meters under surface level, and the Hellyer mine was located 90 meters deep located in Tasmania. The Wilga mine was a bit easier at 50 meters underground in Victoria and the Cannington mine was a blessing only 10 meters below the surface and located in North Queensland.

By the 1980s, the technology had advanced enough that the old Hilton site mentioned above could be mined. Yet even with these successes, there are still plenty of additional Mt Isa locations that have yet to be fully ventured and farmed for their deposits. Additionally, the Northern Territory produces its own share of silver as well as zinc and lead at the McArthur River deposit.

In total, Australia holds the title for the largest owner of silver deposits in the world. Players like Mexico, Canada, the U.S., and Argentina don’t come close. And with additional finds around Australia’s Mt Isa opening up each year, Australia’s consolidation on the title continues to get stronger and stronger. Interestingly, 25 percent of the silver Australia produces out of all these resources goes out of the country in a refined state to Japan. The other 75 percent moves as bullion still trapped in lead to the United Kingdom, being extracted, process, and turned into the silver we all recognize but in England. 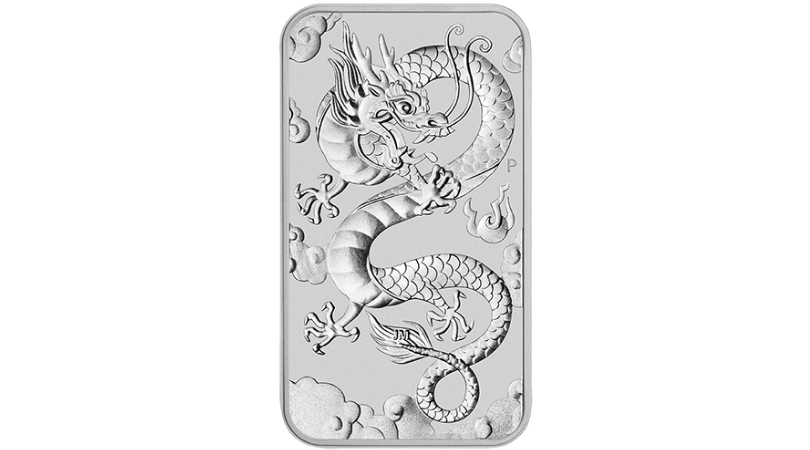 The Perth Mint released the 1oz Perth Mint Silver Rectangular 2019 bar pushing the high quality standard of Australian silver even higher when it came out. With a face value of $1, the silver bar enjoys the technical reference as a coin because it has been approved as an official currency, even though shapewise the product is a bullion bar. As a result, those in the industry often refer to items like the 2019 1oz Perth Mint Silver Rectangular 2019 Bar as “coins” given the fact that they have a legitimate face value as defined by the Australian Currency Act of 1965.

The new 1oz Perth Mint Silver Rectangular 2019 Bar saw an available production limited to a mintage of 250,000 units. This 99.99 percent pure silver piece was protected with a special acrylic capsule when sold, and each silver rectangular bar was recognized as official Australian legal tender, including related documentation. The coin had a minimum gross weight of 31.107 grams, and its maximum dimensions measured 47.6 mm. x 27.6 mm. The coin’s maximum thickness measured 5.6 mm. All 1oz Perth Mint Silver Rectangular 2019 bars were struck at the famous Perth Mint continuing a legacy of numismatic high quality and value with the finished product.

The 1oz Perth Mint Silver Rectangular 2019 Bar boasts a glorious Chinese dragon that was selected for 2019 in recognition of Chinese culture. The Chinese believe dragons rule the water and even control the weather. This mythical creature on the Perth Mint Silver bar meant to symbolize good luck, wealth, strength, and power. Staying true to the traditional representation of the dragon in Chinese art, the bar’s motif has the animal displayed with a flaming pearl as a form of magical illumination. Floating clouds are displayed in the background, enhancing the image’s overall display detail and attractiveness in total.

Additional information featured on the 2019 Silver Rectangular Bar includes the year of 2019, the fineness, weight, monetary denomination, and the one-and-only “P” mintmark of the Perth Mint. The coin also displays an effigy of Queen Elizabeth II as portrayed by the famous artist, Jody Clark.

While the official issuance of the Perth Mint Silver 2019 bar is long over and the available inventory was snapped up, New Zealanders can still get their own version of the famous silver bar locally. MyGold is proud to carry the 1oz Perth Mint Silver Rectangular 2019 Bar among its varied silver bullion choices, having been able to obtain a portion of the original issuance as well as various units over the years since from sellers needing to liquidate their precious metal holdings. To get your own version of the collectible 2019 Perth Mint Silver bar just give us a call or email at MyGold. We can transact in-person or online via a secure courier. We provide one of the most reliable, safest channels for silver bullion buying in the country, which why so many New Zealanders trust us with precious metal buying every day.