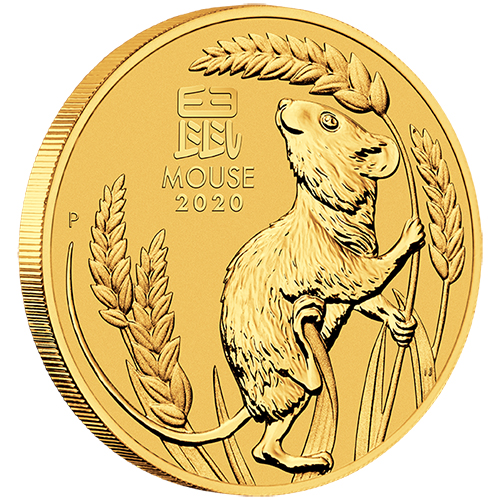 These magnificent gold coins celebrate the Year of the Mouse, the first of twelve animals associated with the ancient Chinese lunar calendar.

Those born under the sign of the Chinese lunar mouse in 2020, 2008, 1996, 1984, 1972 and every 12th preceding year, are said to be smart, resourceful, adaptable and kind. Possessing a rich imagination and strong intuition, mice rely on quick wits and an enterprising nature to find opportunities for success in almost all endeavours.

The Perth Mint will produce no more than 30,000 1oz coins. Production will cease when the mintage is fully sold or at the end of the series, whichever comes first. Due to the low mintage of the 1oz size it is highly collectable and is sure to sell out fast.

Each coin’s reverse portrays a mouse climbing stalks of wheat. Also included in the design is the Chinese character for ‘mouse’, the inscription ‘MOUSE 2020’ and The Perth Mint ‘P’ mintmark.