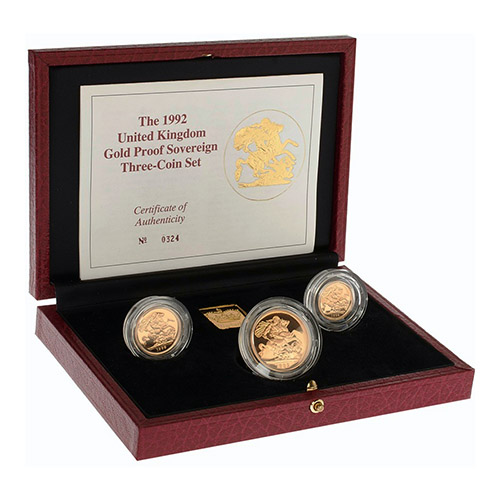 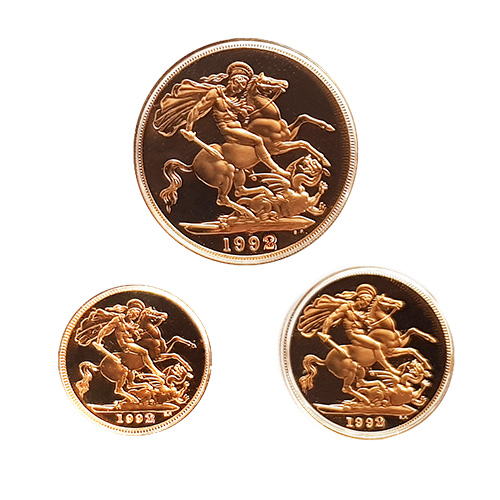 The 1992 gold proof three coin sovereign set contains the gold sovereign and half sovereign, along with the two pound coin (often called a double sovereign), each struck in 22ct gold to the finest proof quality. The sovereign was first struck as a coin of the realm in 1489 during the reign of Henry VII. It was the magnificent coin deliberately created to convey the majesty and dignity of the English Throne and was duly struck in turn by each of the Tudor monarchs. Shortly after his accession to the throne, however, James I brought the issue of the sovereign to and end and it did not appear for another 200 years until the coinage was reformed by George III in 1817.

The new coin bore on it’s reverse a George and dragon of classic beauty by Benedetto Pistrucci, a design now acclaimed throughout the world as a masterpiece of numismatic art. It’s companion pieces, the half sovereign, the double sovereign and the large 5-pound coin, have, over the years, often joined the sovereign in a Proof set for collectors.

Each of the coins in this collection features Pistrucci’s St George and the dragon on it’s reverse, while the shared obverse bears Raphael Maklouf’s elegant portrait of her Majesty Queen Elizabeth II first used in 1985. These Legal tender coins have been struck to the highest proof quality using specially selected blanks and highly polished dies. For this reason it is advisable to avoid handling the coin as fingerprints or marks will impair their delicate proof finish.

Only 1250 three coin gold proof sets have been struck worldwide for distribution, and here at MyGold we’ve only got one available. Get in quick!