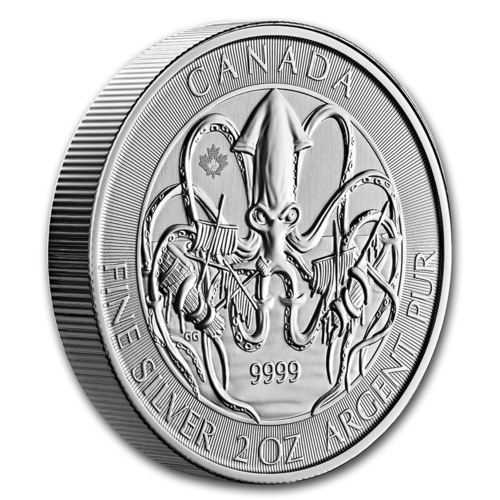 The Kraken is a mythical creature believed to terrorize the deep ocean around the world. The myth of the Kraken inspires sheer terror as it incorporates the vast unknown of the deep ocean in the form of a massive, tentacled, bloodthirsty behemoth. Within Canada, Maritime lore has a stake in this fable, as many claims to have seen the deep-sea terror as far back as the 1700s. The Royal Canadian Mint brings the creature to life on this 2 oz, 9999 pure silver coin!

The brute strength, sheer size, and terror are conveyed in equal parts on the reverse side rendering of the Kraken. The beast is centered, ominously glaring back as it prepares to devour two sea vessels, with its many tentacles. Skillful texturing is applied to the reverse side’s field, depicting the Kraken, suspended in water. The image is encapsulated with a light refracting, radial-lined encapsulation which contains the nation of issue, and metal type

The obverse contains her Majesty, Queen Elizabeth II, centered over a light-refracting radial lined coin field. The Queen is encapsulated by year of issue, her title, and the denominational value

The Royal Canadian Mint, renowned for its celebration of Canadian Wildlife, goes against its conventional standard in stunning fashion. This coin is the first release of a new bi-annual series, which celebrates a creature from the sea, land, or sky. Coveted by lovers of the lore of all types in addition to investors and coin collectors, this coin serves as a great gift or a sound investment.