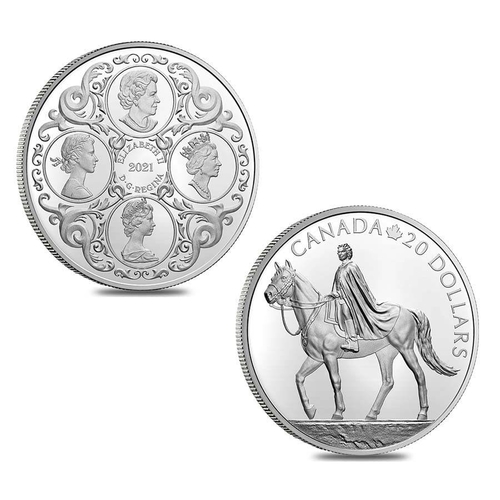 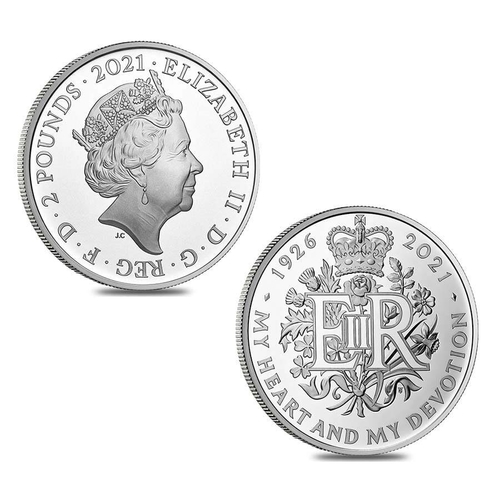 Reverse design features The Queen Elizabeth II Equestrian Monument by sculptor Jack Harman (1927-2001). It depicts Her Majesty riding astride her horse, Centennial. The statue was unveiled by Her Majesty on July 1, 1992, on Parliament Hill in Ottawa, Canada.

Obverse features ornamental flourishes & the four effigies of Her Majesty that have appeared on Canadian coins since 1953 (clockwise from the top): the effigy by Susanna Blunt (2003-present); the 1990-2002 effigy by Dora de Pédery-Hunt; the 1965-1989 effigy by Arnold Machin; and the 1953-1964 effigy by Mary Gillick.

The reverse features a symbolic design by British heraldic artist, Timothy Noad. Behind the Royal Cypher, The Queen’s royal heritage and symbols of the British nations are represented by a posy filled with thistles, daffodils, roses, and shamrocks. The reverse also bears the inscription, “MY HEART AND MY DEVOTION”, referencing a promise The Queen made in her 1957 Christmas speech and has kept ever since.

The obverse features the effigy of Her Majesty The Queen by Jody Clark.