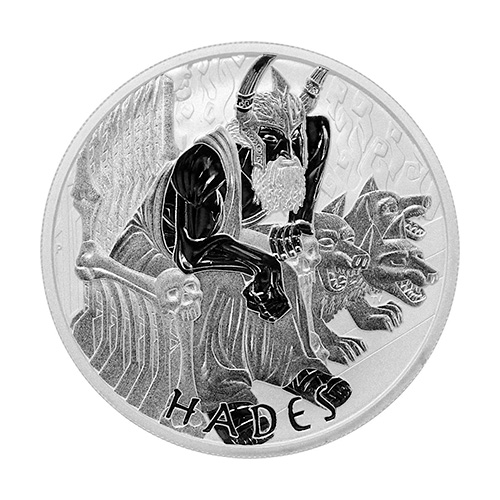 In 2014, The Perth Mint released its first ever antiqued coins in the Gods of Olympus series. The coins were incredibly popular and immediate sell-outs. To pay homage to a product that popularised the antiqued finish, the iconic Gods of Olympus returned in 2020 in an all-new bullion series. In 2021, the legacy continues with the third release of the series featuring Hades.

In ancient Greek mythology, Hades was worshipped as the God of the Underworld and the ruler of the dead.

Historically, Hades was often depicted sitting on his ebony throne with Cerberus, the three-headed watchdog by his side. He was also known to wear a helmet of invisibility given to him by the Cyclops to help in the battle against the Titans. His name is said to mean ‘invisible’ or ‘unseen’ and the underworld which he ruled over was also called Hades.

Mythology lovers- Don’t miss out! Only one in stock.