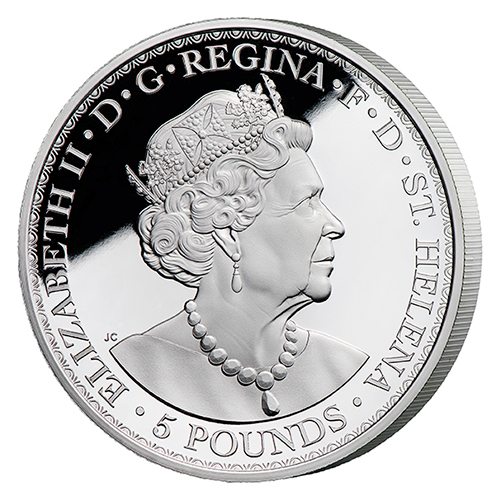 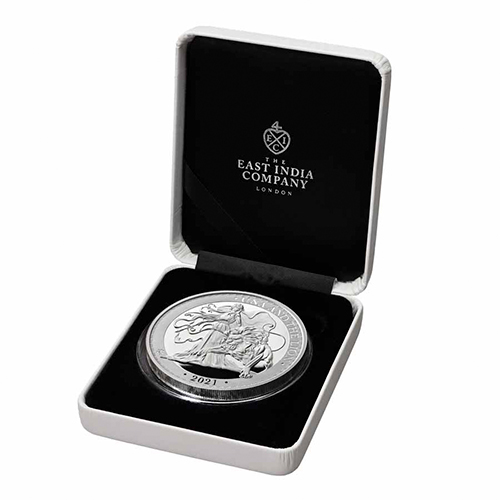 Celebrating our heroine Una, an iconic symbol of beauty and honour, and her majestic protector, the lion, the 2021 Una & the Lion 5oz Silver Proof coin features a beautiful design by engraver Glyn Davies. The powerful and dramatic 2021 design highlights the beauty of Una and the raw power of the lion.

The coin features a stylised representation of Una & the Lion standing side by side. The lion stands in an aggressive stance with his teeth bared and his terrific full mane flowing. By his side, exquisite Una gazes down at him with her robes flowing out behind her capturing both her beauty and strength.

Presented in a luxury presentation case with a numbered certificate of authenticity.

UNA & THE LION, Beauty, Strength, & Honour
The legend of Una & the Lion dates back to the 16th Century and Edmund Spencer’s epic medieval poem, The Faerie Queene. Una is a beautiful princess on a quest to rescue her parents from a dragon who has imprisoned them in a tower. She encounters a fierce lion whose rage is subdued as he is captivated by Una’s beauty and innocence. He becomes her faithful companion, forever by her side, protecting her from harm.

The relationship between Una & the Lion and the great coin designers began with the 1839 five-pound piece, produced to mark the first anniversary of the coronation of Queen Victoria. It featured a bold neoclassical design by William Wyon, whose Una & the Lion symbolised the young Queen Victoria harnessing the power of the mighty British nation, represented by the Lion.

It is now recognised as one of history’s most beautiful coin designs, a legacy which continues with the East India Company’s annual Una & the Lion Collection.