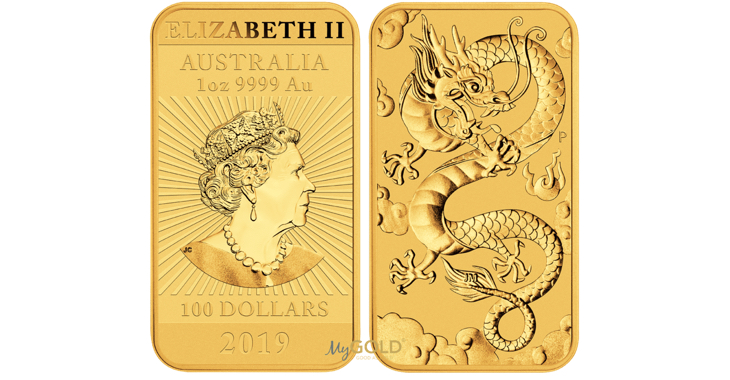 One of the additional collection items for gold holders has regularly been the 1oz Perth Mint Gold Rectangular Bar, providing both a collectible item as well as a clear, government-issued form of gold bullion that is easy to measure and store. Designed with an eye towards appeal as well as official status, the Perth Mint gold bars have long been an alternative form of government-issued gold bullion as well as in other precious metals as well. Every year the Perth Mint issues a new set of rectangular bars, all in limited runs and with amazing detail and quality with the finished product. Some of that has to do with the high quality of gold naturally found in Australia as well. Whether as a gift or an investment piece for alternative value protection, the Perth Mint 1oz gold bars have always enjoyed high demand and resale value afterward.

Background on the Mint’s Dragon Bar

The 2019 Perth Mint Gold Rectangular Bar provided a beautiful example of what the Mint can produce in terms of expertise. The 2019 bar profiled a Chinese dragon displayed in a highly stylistic rectangular format. The Mint used a single ounce of 99.99% pure gold for each bar. The dragon itself was featured chasing a pearl on fire. The background was also lined with puffy white clouds in the bar design, giving the piece more visual appeal in the finished version. The bar also displayed the monetary denomination, the year of 2019, the one and only Perth Mint mintmark, and the bar’s fineness and weight. An effigy of Queen Elizabeth II was also displayed as designed by artist Jody Clark.

Only 20,000 new Dragon bars were released for 2019 which made it clear there would be no replacements or later issues of the same product at some point down the road.  Investors who acted quickly snagged one or several of the new 1oz Perth Mint Gold Rectangular 2019 Bars as they came out, wiping out any chance for later customers seeking the same directly from the Mint.

The Perth Mint and Its Reputation

First established in 1899, the Perth Mint was in response to the extremely valuable and high quality gold veins that were discovered and located in the Coolgardie as well as the Kalgoorlie regions of Australia. However, Perth was not the first Mint for the country. The two prior mints that pre-empted the Perth facility included the Sydney Mint as well as the Melbourne Mint. However, only the Perth Mint still functions out of the three.

The Mint was born out of necessity; miners needed a clear and secure location that was local and provided them a depository for their gold as well as converting it to coin form. That function stayed in place until 1990 when the Perth Mint was relocated into town. From the first year of operation until 1931, the Perth Mint produced well over 106 million gold coins (sovereigns) as well as 735,000 half pieces (half sovereigns). These coins circulated well beyond Australia due to the commonality of gold sovereigns throughout the British Empire at the time. Both trade and the military moved considerable numbers of the coins to Asia, Europe, Africa, and even the U.S.

1931 was a pivotal year due to the fact that the powers in England decided to let go of the gold standard, thereby eliminating the need for gold sovereigns. The Perth Mint continued to make gold bars through to 1940, but once World War II was in full swing the Mint found itself producing coins again. This time the Mint was instrumental in mass-producing copper penny coins which lasted until 1964.

In 1957 the Perth Mint achieved another level of fame and gold quality by producing the world’s purest form of refined gold. A proof plate of 999.999 gold was created. The quality was so high, even the Royal Mint in England asked for a sample of the gold to use as a standard benchmark for their own quality control.

The Perth Mint was generally under the jurisdiction of Great Britain until the middle of 1970 when it was finally relinquished in title to the Government of Western Australia. The timing was fortuitous; a massive gold boom happened in-country right after, and the management of that gold, as well as the profit from its value, stayed in Australia as a result. And, interestingly enough, another boom is on the horizon again that started in 2020.

The Chinese have long favoured dragons as their culture considers these creatures to be somewhat divine. Dragons are also revered by the Chinese for their strength, mythical nature, positive fortune, and wealth. The creatures are commonly portrayed by Chinese artists with pearls aflame and other luminous objects nearby or in the background, and the Chinese believe dragons rule the weather and water. By including the dragon on the 2019 Perth Mint gold bar issue, the Mint was expanding its product line artistry and provided a diverse approach towards Australian culture and numismatic collectability. The dragon was also indicative of the value of the precious metal used, with the creature often associated with wealth, good fortune, and support from the ancestry of the past.

Each 2019 oz Perth Mint Gold Rectangular Bar is considered legal tender in accordance with Australia’s Currency Act of 1965. The specific piece is 99.99 percent pure gold, weighs 31.107 grams, and has dimensions of 41.6 mm by 24.6 mm by 2.40 mm. Though the item is officially dubbed a “bar”, it is actually a coin by legal reference due to having a bona fide government face value of $100 (AUSD). That said, everyone expects the gold bar’s real value in trade to be appreciate as time progresses, as can be seen by the amount aftermarket trade that happens in Auckland and elsewhere.

Obtaining the 1oz Perth Mint Gold Rectangular 2019 Bar for Yourself

As mentioned earlier, the Perth Mint Gold bar for 2019 sold very quickly, and the inventory provided by the Mint was exhausted as soon as the issue became available. However, MyGold was able to both secure bars during the issuance as well as find bars afterwards from various buyers who then needed to liquidate them later on. As a result, the MyGold inventory makes it possible for collectors and gold investors to include the Perth 2019 bar in their bullion holdings in New Zealand without difficulty. And, it’s a great way to catch up a few years earlier if you’re starting your own collection of Perth bullion bars for the first time.

To get your own Perth Mint 2019 1oz Gold Bar special issue, MyGold is your best option and bet in New Zealand. Instead of taking the risk of ordering overseas, you can rely on MyGold’s secure and safe channels, both for in-person as well as secure courier delivery. Get a piece of history as well as some of the highest quality gold investment possible. And MyGold is available as your partner all the way.