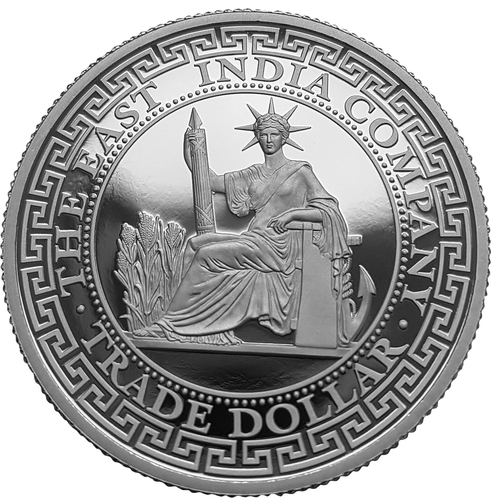 Struck to a flawless proof finish, the reverse side of the silver 1oz proof quality piece is inspired by the famous French Indochinese silver Trade Piastre de Commerce. Beautifully engraved it is inspired by the image captured in the original Piastre de commerce reverse by Albert Barre. An exceptionally engraved seated allegorical female figure appears wearing a headdress of rays similar to that seen on the Statue of Liberty. To her right, a bail of wheat is shown, symbolic of the bountiful food grown in Southeast Asia, and to her left, an anchor symbolising France’s significant merchant marine trade with the world. The completed design is surrounded by a traditional ornate oriental border which appears on each Trade Dollar in the collection.

A lasting tribute to a currency born out of commerce and trade, The East India Company’s 2020 French Trade Dollar is the final coin in this much loved five-coin series completing a collection of some of the world’s most admired pieces.

The history of the French Trade Dollar

Known as the INDOCHINA “LIBERTE” PIASTRE DE COMMERCE, this magnificent silver coin was initially introduced with the same specifications as the Spanish piece of eight equalling 24.4935 grams pure silver, later reduced to 24.3 grams in 1895. Created to facilitate trade in the French Indochinese Union created in 1887 it was used throughout the entire Indo-Chinese colonies, to create a much more stable economy.

The Piastre, distinctly French in appearance, depicted elements from the Great Seal of the Second French Republic which was designed in 1848 by engraver Jacques-Jean Barre. It was his son Albert who designed the Indochinese Piastre coins with the family name of BARRE appearing below the personification’s foot.

The Piastre de commerce was initially closer in value to the American Silver Dollar than it was to the French Franc. After the First World War, the Indochinese Piastre was one of the last coins to adhere to the silver standard which remained in place until 1930. Production of the French Indo-China Piastre de Commerce coins which included the smaller denomination copper coins of ½ cent and one cent and silver coins of 10, 20 and 50 cents based on the Seated Liberty Piastre designs were minted at the Monnaie de Paris.
The final one Piastre coins depicting this beautiful design were produced in 1928.