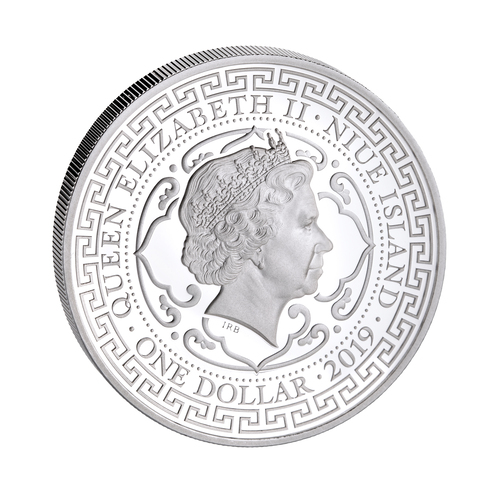 Struck in exceptional proof quality, the reverse side of the silver one-ounce pieces features a detailed depiction of the classic Chinese dragon in the centre, surrounded by the text: “THE EAST INDIA COMPANY”, the denomination and a traditional oriental patterned border. Engraved with a uniquely patterned obverse which includes an elegant effigy of HM Queen Elizabeth II created by British sculptor Ian Rank-Broadley, the 2019-dated Chinese Trade Dollar coins have a limited mintage of just 1888 pieces and are the first coins in the collection struck with this year date.
A lasting tribute to a currency born out of commerce and trade, The East India Company’s 2019 Chinese Trade Dollar is part of a five-coin series and is sure to stand out as one of the collection’s most admired pieces.

The history of the Chinese Trade Dollar

The ferocious depiction of a mythical dragon in traditional Chinese style appeared on a new silver Chinese coin in 1889, following the reorganisation of Chinese weights and measures sanctioned by the legendary Empress Dowager Cixi – one of the last empresses of China’s Qing Dynasty – in her quest to modernise China’s economy.

Arising from the surge in western merchants looking to trade with China following the opening of the Opium Wars, the Chinese Trade Dollar was minted in the same specification as the trusted and preferred Spanish 8 Reales and became commonly known as ‘Silver Dragons’ or ‘Dragon Dollars’.