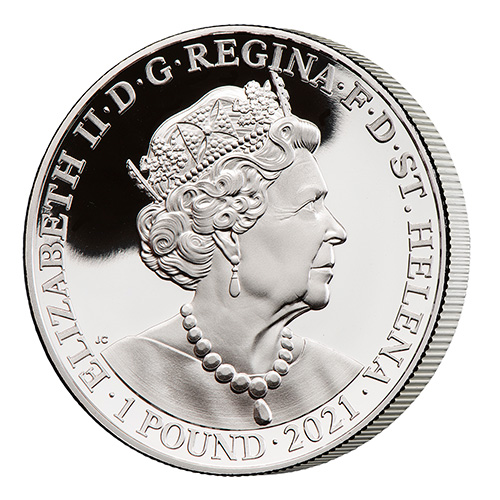 To mark the 200th Anniversary of the Death of Napoleon and celebrate the humble bee that became the icon of his Empire, this 2021 coin design combines key elements of Napoleon’s story. Its outer circle proudly carries the name of Napoleon Bonaparte and the years of his life; to the left-hand side, one of Napoleon’s Bees forms a punctuation point between the date and his name; to the right that role is performed by The East India Company mint mark.

Moving in towards the center, a swarm of bees are picked out in our frosted Proof finish against the polished table of the coin, circling a classic laurel wreath or garland, symbolic of athletic victory and the Emperors of Ancient Rome. The garland is topped with the crown that Napoleon used at his coronation in Notre Dame, itself his interpretation of the crown of Charlemagne that was lost during the French Revolution.

At the coin’s heart sits the humble but powerful bee. The intricately detailed design captures the natural beauty of this symbol of industry and harmony that connected Napoleon’s new Empire to the kings of ancient French history.

With a mintage of only 50 coins, you won’t see this coin anywhere else on the market. Comes beautifully presented in a sleek black display case.

Don’t miss out on this rare and intricate beauty. Call us today to secure the only one we’ve got!