Australia’s Perth Mint has a long history of producing high-quality bullion collectibles, both in the form of bars and coins, so when the 2021 designs from Perth get announced for release to the public, everyone in the gold and silver business, whether for investment or numismatic interest, pay attention.

Perth Mint bullion coins have long been famous and recognizable in the numismatic circles as well as among bullion traders. The unique and recognizable kangaroo motifs on precious metal issues made them a standout early on given the fine detail the coins were fabricated with. All the major precious metals were included from gold to silver to platinum. And, in addition to the ‘Roo, the coins also reflected other famous animals of the Australian mainland such as the kookaburra and the koala. Making a switch from tradition, later coins added the ox in recognition of the Chinese lunar calendar as well.

The Australian bullion coins continue to be gain fame and recognition, especially with the boost in bullion values, particularly gold. Perth Mint coins from 2020 pushed the operation to its full capacity as well as into backorder with so many people chasing bullion issues of any kind, both in Australia as well as worldwide. As a result, 2020 was probably the highest production year the Pert Mint experienced in its entire history. Running at a rate of 100,000 coins per day at some points of the peak, the Perth Mint easily had its employees working on six day shifts to stay up to pace with the sales orders.

The Perth Mint management knows the current market involves nothing they’ve ever seen before. An incredible number of investors are active and moving around, looking for assets that are separated from the typical business markets but retain significant market value regardless, even when times are bad. As a result, precious metal bullion has become far more than just a hedge tool. They’ve transformed into value producers all by themselves, especially in a market looking for stability when everything around it is moving at hyper-speed. The old saying of diversifying a portfolio has never held true more than now in terms of managing risk and having alternative investments to fend of potential losses.

The above said, quality still calls. Just any old bullion doesn’t command the popularity that the Perth Mint has enjoyed for years, and it is that dedication to quality that has allowed the Australian Bullion Coin Program to be a major standout versus just another issuer or passe’ coins and bars. In fact, Australia’s coin quality is so high, both in terms of metal content as well as the artistry the coins are made with, they typically outpace other countries when compared with the same amount of gold and spot price value. 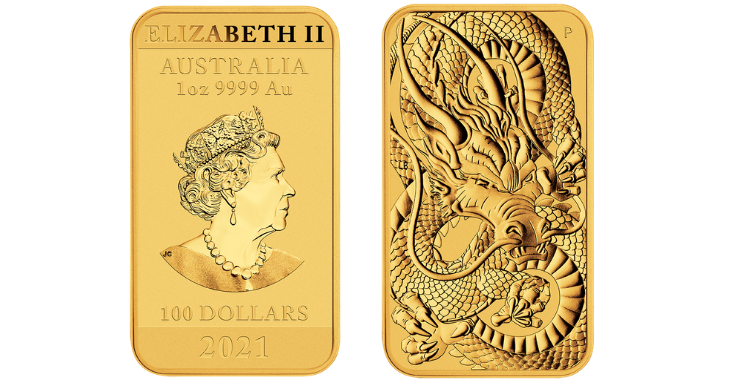 The artwork permanently printed into the coins comes from the teamwork of artists who are at the top of their game in crafting images for bullion coins and currency. Working in tandem with all the stages of coin production, the artistry incorporates the realistic possibilities that can occur with coin production, even under the best conditions. As a result, the quality is tremendous because it didn’t try to achieve something that was beyond what the manufacturing side was capable of handling in mass production.  This smart approach allows the Perth Mint issues to consistently stand out with high caliber. Nothing is rushed, pushed, or cut corners. And, the range of size of the issues allows anyone to engage with Pert Mint inventory, ranging from 1/20 of an ounce to as much as 10 kg.

Because the demand in 2020 was so tremendous and overwhelming, the 2021 Mint release was planned in a staggered fashion. This help built up demand going into the new year as well as allowed the Mint to match the product in stages versus being overwhelmed. Including gold, platinum, and silver, the 2021 line started with the Australian Lunar series. The Kangaroo set came afterwards, right before Christmas, and then the Koala series was produced as a nice respite after the holiday season in January 2021.

Remember, the Perth Mint produces coins in general that are at the highest quality level. While many mints produce their bullion at a standard level acceptable by the spot market, the Perth Mint has consistently used some of the highest gold available for its inventory production. With gold issued at 99.99% purity and the same for the other precious metals fabricated, the difference even when slight allows the Pert Mint coins to stand out in the crowd vividly.

Again, made with the three main precious metals, the Lunar Series III features the bold standout of the Ox on all three types of coins. The Lunar series is part of an ongoing production that includes the full dozen animal representations of the Chinese calendar based on the lunar cycle. And there is a variation for collectors. The silver stands out with a different version of the Ox than gold and platinum. Issued in the full range of sizes from the 10oz version to the 1/20 of an ounce, there is a selection for everyone in the Perth Mint offerings, which is definitely intentional to appeal to the widest crowd possible. Issued in September 2020, this series set was the first of the 2021 issue to come out with only 30,000 gold coins provided. The platinum issued 5,000, likely making them very collectible, and the silver ran at 300,000.

Limited only to a silver issue, the Kookaburra bullion coins are distinct from their native bird and detail for the coin’s production. The Kookaburra series issued in October with a huge 500,000 coin production, anticipating a large demand, both for bullion as well as collection. The coin was only produced in three sizes from 1 kilo to 10 ounces and 1 ounce versions.

Probably the most recognizable of the Pert Mint coins, the Kangaroo series was produced and made public in November 2020 in gold, platinum, and silver. This particular animal has been on Australian bullion coins at least 33 times now in the gold version. The 2021 series included five different versions for the gold bullion selection as well as a 1 ounce size for the platinum coin and a 1 ounce similar version for the silver.

Finally, the most emblematic of Australia, the Koala series coins were issued in January 2021, ushering in the new year. The coins come silver only, but Perth issued them to the tune of 300,000 units in 1 ounce size. The koala on the coin sits in a classic pose eating and basking in the sun, typical of its behavior in the Australian outback. With a practical mirror surface, the public exploded in the coup de grace of numismatic charm.

The Perth Mint coins are expected to be in production until supply runs out or until the end of 2021. However, given the bullion demand that continues to still be in place, it is very likely these coins will be consumed by orders well before December 2021 arrives. And, given the pricing of silver and its recent hot demand, half of the categories are probably going to be oversold, driving their Perth Mint coin value even higher in secondary sales.

Fortunately, for New Zealand collectors there’s no need to go bananas trying to get an order in as fast as possible with the Perth Mint. Instead, by simply ordering and purchasing through MyGold, one can have the full 2021 collection of Perth Mint issues and coin sets, even from back in September when the Lunar series first came out. By contacting MyGold, you can have your full access to the Perth Mint production, not just for this year, but for prior years and new coins to come. This is one of the reasons why MyGold continues to be a top standard gold bullion provider for New Zealand customers. Contact us to find out more.