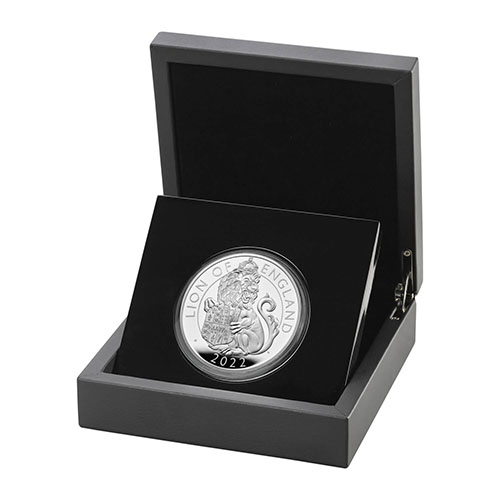 Invest in a new bullion collection from The Royal Mint inspired by the Royal Tudor Beasts. The Lion of England is the first of the ten heraldic creatures that stand guard over the moat outside Hampton Court Palace in the form of fearsome statues. Embodying the strength of the Tudor dynasty, they symbolise the ancestry of Henry VIII and his third wife Jane Seymour. The tradition of mythical beasts representing the values and traits of a kingdom began centuries earlier, when heraldic creatures appeared on flags and banners on the battlefield to unite and direct armies and strike fear into the enemy.

The reverse design by David Lawrence displays the Lion of England in an intimidating pose, inspired by the Moat Bridge Royal Beasts of Hampton Court Palace. The design is also set against a new surface animation background texture. Jody Clark’s portrait of Her Majesty The Queen also features on the coin’s obverse.

This five-ounce silver bullion coin will also be available as a one-ounce fine silver edition, as well as one ounce gold.